Serpent fire, the most fundamental power. How miraculous and beautiful you are! When we are still bound to the everyday worries of our humane life, you rest coiled in your confined chamber deep in the earth’s center – ”wisely thou waitest, til thy time’s to come”.

But as soon as our hearts start to beat more vehemently, when we dare to cast our sight upwards to the starry firmament above the earth’s sphere, and when we dare to promise to serve Truth and Love and sacred Meaning above all our own interests – then flashes your eye, and the dragon breathes upwards a wave that makes the world blaze as with the colours of million gemstones. The aspirant holds his breath; he feels his hair raising up; he sees around him the immeasurable depth, of which every drop is saturated with that Meaning of whose servant he has given his heart to be. No longer will there be a moment of no importance, not a single one wasted, for the power is in him and in everything he will face.

How deep a happiness! How great a suffering! What an ingeniosity, beyond compare! What a madness! When the bolts have been lifted by work of service, and the door between the small and great world opens, you feel dizzy like you would on the top of the highest mountain, your forehead touching the cold brightness, being full of sweet warmth. My beloved cold Father, who are my spirit and mind! My beloved fiery Mother, who are my body and personality! How you are close to every being! Every moment is a clear white moment of the new world, with no past, without a future.

THE WHITE ASPECT is about pure, halo-like radiation. It does not force. It demands the doctrines of harmony already adopted and the fanaticism of ego already tamed. Only one single exertion, one forced step, one moment of hesitation, and the white brother stops being ”candidus”. For the genuinely white robe is never white because the one who wears it would fear to stain it and therefore shun something one would see as dirt, but because the inner light shines so bright that wherever one places his or her foothold, there already is the floor of the sanctum to support it. Even if a white adept would be born into the receptacle for cattle’s forage, his touch would change it to the chest of the sacred serpent. This is true tantra, the ability to purify with one’s own essence alone. Is it hard? Not only hard, but impossible before the core is wholly broken and transformed. That is why it has been said: ”Ye shall know them by their fruits”.

The one who has received the baptism of living water and has been able to bring it to everyday life walks as a stranger among the people. But unlike as on the gloomy graveyard path, one doesn’t feel to be separated from their lives; unlike as on the bloodied path of the cross, one’s hands are not bound from helping them. His hand that grasps no weapon, no quill nor a tool any longer, is like a blazing pentagram that holds and transmits the perfect self-awareness – the divine knowledge, for likewise it has been said: ”Ye are gods.” This joy can never vanish or turn to despair, for there is nothing reactive, nothing that would like to flee, and nothing not-immanent: it is earned and true state of one’s inner brightness.

In this way does a white brother see his mentor and guide, who is himself, his master, his god, and the presentation of the whole. He is Lucifer-Christos, and every man and woman who has gone through the first initiations to the higher attainments. Such a being dwells in one’s body as a bright heart of a flame in the lantern. May the lantern be covered with the stained glass, be it hidden or open, there is no doubt in or about him. This is the mystery we are following in the lodge of Lucifer.

My beloved serpentine Goddess! Arms, feet, and face pressed onto earth I can only join my hands to prayers; this elevation makes me mute. How much have you demanded from us, O Life, and how you do brighten us. One and twenty centuries is not enough for the weaving of your hymns, but we try, O Master, the magical flame, Lucifer! Never take your guidance from us. In the name of Love and Truth, be blessed forever you, who gave birth to Ofiomorfos our redeemer. 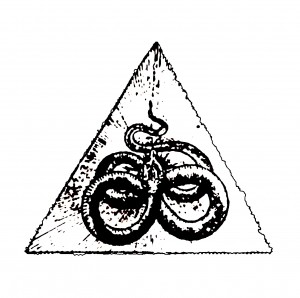