I’ve recently moved to countryside, into a house that lies under the largest spruce tree I have ever seen. Much of the decision of moving was based on that very tree that has stood on the same spot for I can only guess how long. I thought to win the tree’s favour, so to say, would give me mighty protection and serenity. In Finnish tradition the spruce is connected to death and the underworld, and the lone tree hovering over the house in winter darkness truly touched my shamanistic heart.

As spring came, the long neglected garden began to stir with life. Hundreds of nettles burst from every corner on the yard and I began to make plans and to dream of tending a garden again, drawing pictures and reading up on various plants, walking in the forest nearby looking for something I could move on my yard. As I raked and raked, dug out weeds, delighted in new mysterious plants that popped up from the ground and picked up forgotten pieces of plastic and broken glass, I began to ponder on the art of gardening, which is a completely artificial imitation of nature and one in which man’s desire to control and shape all things is ever present.

Japanese gardens, lush with green, are a great example of a careful construction that resembles an idealised and perhaps slightly crippled image of nature. Each year, fallen leaves are hand- picked away from the ground, old trees are tied with ropes to protect them from the fallen snow and gardeners brush the rocks in ponds and streams to remove algae. A staggering amount of work is put into these gardens- but there is very little actual, “real” nature in the Japanese garden. They are a poetic vision, a mirage- and perhaps peace is so easily found there because of the hidden constructions that make a man feel safe and balanced, allowing space for thought.

All art, I believe, is an imitation of nature. We may learn to paint wonderfully, under the natural laws that are somehow most pleasing to the eye- executing compositions according to the golden ratio, choosing complimentary colour schemes, imitating curves and repetition of shapes around us. But we are always borrowing from nature, the mightiest of masters. Humans recognise the greatness of nature and are often a little ill at ease with many of its aspects, wishing to tame them, present them nicely and to either suppress or forget the uneasy bits, or else remove them entirely. To me, the yearly cycle of nature and all phenomena therein are the faces of master Satan- each offering its perils, possibilities and also undoubtedly gateways into ourselves. 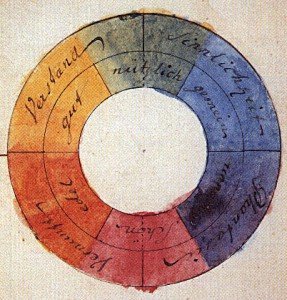 All esoteric work is filled with difficulties, both mundane and otherworldly. Regardless of which approach one would take, there’s great perils ahead. Esoteric work changes us, for better or for worse. Most of the times, a little bit of both. And sadly, it’s almost certain that esoteric work will destroy a person who wields no patience.

As I waged war against the nettles and weeds in the garden in order to replace them with something that I wished to plant and despite wanting a wild-looking yard I couldn’t help but begin to question my justification to do so. The neglected garden had slowly begun to shift into a more natural state and even if it would be years and years before that state would truly occur, here I was, “correcting” the land. The destruction of the uprooted weeds in which I so readily engaged seemed to hint of something that was in myself. Was I symbolically destroying the chaotic qualities from my surroundings in order to suppress or to be more at peace with the ones in my persona? Or did I wish to leave my mark on this place and to somehow make it an extension of myself?

In The Star of Azazel, esoteric work is roughly divided under three different colour aspects. The Red Aspect, at times much mythologised, has often proven problematic as it draws in strong personalities. As Satanism undoubtedly attracts firstly, well, angry and intelligent young men, the Red aspect tends to allow many of these qualities to swell out of proportion. Impatience, harshness, rigid approach to practices- these are just a few of the continuously surfacing challenges on the Red path and also things I am guilty of.

It seems to me that the Red aspect ought to be neither masculine nor feminine, but both. Often times the Red aspect member is painted up to be aiming towards a very highly idealistic character- the seer, the fakir, the warrior, the medium, the artist. Yet in these archetypal figures lies a great danger. They are simply so grand that they may begin to tempt egoistic approach which either allows the undermining of one’s abilities with too much modesty or introduces a rigorous, somewhat masochistic warrior-training mould. Often the approach has been very masculine; one attempts to conquer and to harness, forgetting how to yield. In short, one wages war against the weeds and soon battle itself becomes a value. War against the bad qualities which need to be purged and won, first in self and then perhaps in others as well.

But despite being horribly hard, esoteric work is not a war. Rather, it is a dance. A dance with numerous, subtle steps and a strange tune- and how easy it is to make mistakes, to get tangled in one’s fancy robes or to have two left feet, to mistake a mirage to be one’s leading partner!

In the light of these things, a garden may be more than a technical construction. It has all the potential to become a self- made temple in which man imitates creation and attempts to work with it. At the same time, it’s a mirror- why do I favour one plant over the other? What does a garden reflect of my temperament? Is it a meticulously groomed football field over which the gardener looms armed with a can of poison and a spade, daring unwanted plants to grow on the land that is theirs– or are frogs and snakes welcome to continue to exist therein? Surrounded by nature, one may find the courage to think. To accept the things that may not be changed. And furthermore, to understand and give space for the beings that were there before and how everything is connected- from a lowly worm to the tall, majestic spruce. How the gardener is not outside of this system nor never truly the master of it. Because just like a dance, gardening too is a meeting of two. A garden also always forgives and allows the work to be started over and over again. Of this much can be learned, for it’s rare that our attempts at occult work would be one clean run to the goal. In reality, mistakes will be made along the way.

The seemingly externalised esoteric work of gardening is a monotonous task fit for monks. But observing the developing garden with its subtle alterations throughout the year and learning to yield to its rhythm is a task fit for a seer. It takes great patience and sensitivity not to destroy the existing landscape in a spur of the moment “better” ideas, be it on your yard or in your heart and mind. In a similar fashion, it takes aeons to become a gardener of that complex fabric that is your immortal soul.