Baphomet and the Roots of Satanism

Baphomet and the Roots of Satanism

by Nefastos
I was just weeping bitter tears when forced to return Per Faxneld's great Satanic Feminism to local library after a year-long loan. Luckily, the god of books send to me her paraclete, in a form of two inexpensive Indus & Mohenjo-daro seal corpus books (Annales academiae scientiarum fennicae, series B 239 & humaniora 359).

In the first of these is included also the famous "proto-Shiva" of the Mohenjo-daro seals, from the third millennium before Christian era. Its similarities and correspondences with the 19th century "Baphomet" (Eliphas Levi's emblem of the universal magical agent) are striking for a Satanist.

My article about the "absolute or Shiva aspect" (originally published in Hylätty Kivi #7, 2012) of Satan is not yet available for non-Finnish readers, although the alpha translation is already done; in it I discussed some aspects of this claimed "Satanism" of Shaivite and pre-Shaivite thought & symbolism. I hope we might discuss these claimed ancient roots of proto-Satanist world view, though. Any ideas & most associations are warmly welcome here!

p.s. Suggested reading also include: Danielou: Gods of Love and Ecstasy - The Traditions of Shiva and Dionysus (thank you Obnoxion for originally pointing this out).

by Heith
Invigorating to see some images for a change as well! Thanks for a interesting post.

As you know, my knowledge and understanding of anything outside of northern european / Siberian tradition is very slim. The image that you posted immediately did bring to mind the Gundestrup Cauldron with the enigmatic horned figure in panel A which I had the pleasure of seeing with my own eyes in the National museum of Denmark. 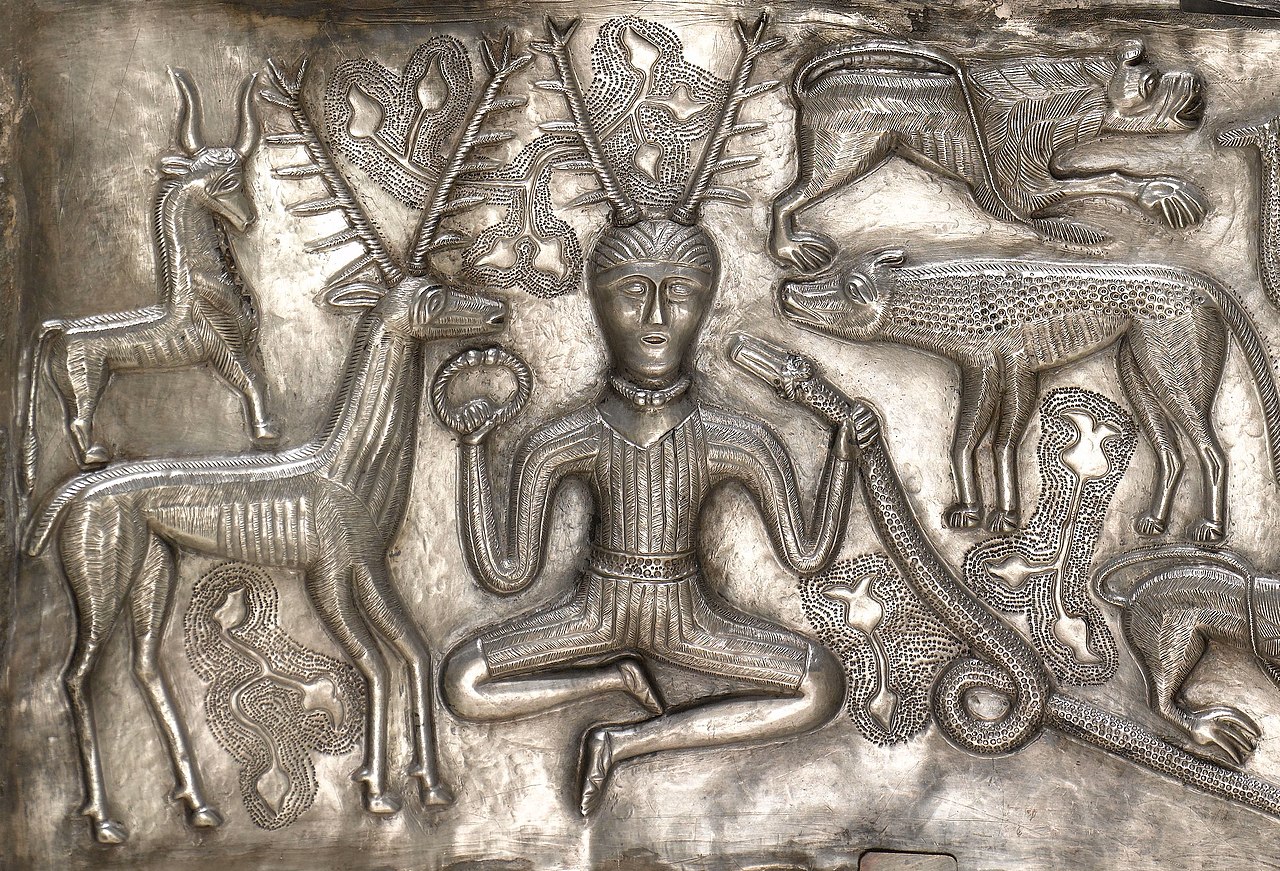 The meaning of this figure is of course unclear, but the cauldron is very old, estimated to date around early Roman iron age. The vessel is silver, very large, and the use has been guessed to be ritualistic one, such as during blots. I believe that the Wiccans have thought this image as a representation of Cernunnos, or the Horned God, whom they believe to be the Lord of animals and nature. No written data of Cernunnos survives. Another interpretation I've heard, from the asatrú folk is that this image would represent Freyr, but I'm a bit doubtful as the cauldron most likely isn't of danish origin.

by Nefastos
Yes, that horned god cauldron is a very good example of the same kind or iconography persisting. I wonder what is the history of the clothes added here (thus removing the flagrantly ityphallic nature of the archetype - although it remains as an idea, with the horns & animals).

Here is another picture from the same source. There are also a six-rayed star (?) and a vertical fish form similar to it in the background, both coming close to a crude vesica piscis.

Please note also the Nyarlathotep's tentacle growing from the face of the figure...

(I am kidding, but the picture is real.)

by Teratokrios
Here is another "Golden oldie" from 13,000 BC. The Sorcerer cave painting from Trois-Frères, France. He isn't sitting though, but many of those attributes listed can be found on this in some way.
There's also been some critique that the original horns are not painted on, but actually cracks on the cave surface, but something in me doesn't want to cast doubt on the original scetch of Henri Breuil. 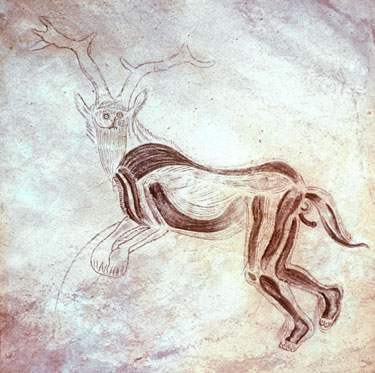 by ben Shachar
As with the photos of protoshiva it is interesting to note how many modern day zodical symbols are the Mesopotamian cylinder seals
20170307_021039.png

by Nefastos
Speaking of the Mesopotamian symbolism & its connections to the same of ours, yesterday I was reading Asko Parpola's great treatise "The Sky-Garment: A study of the Harappan religion and its relation to the Mesopotamian and later Indian religions" from the eighties. Citing Jaiminîya-Brâhmana, he tells about Garga which is a Vedic hecatomb rite for sacrificing a thousand cows. The thousandth of these cows was especially important, and had to be tri-rûpa (three formed or three-coloured):

While many know that our brotherhood's aspect system also partly corresponds to the Hindu guna system of sattva, tamas & rajas trinity, I think the depth and age of these three basic colour symbols is not often deeply pondered.

Nefastos wrote:I was just weeping bitter tears when forced to return Per Faxneld's great Satanic Feminism to local library after a year-long loan.

Almost off-topic (which is a shame, because this is a fascinating topic), but I've heard rumours that this book is getting a reprint soon. Sought after by many, and by your comment I'd deduce that it is worth picking up when it's out.

Concerning the history of satanism, one of the many books I'm currently reading is Children of Lucifer by Ruben van Luijk and judging by the first 150 pages or so, it is very interesting, albeit written in academic style heavy as lead. Very thorougly researched and argued work, as it seems.

Another one would be Baphomet by Tracy Twyman that I have, but that's still on my queue of pending unread books.

Abhavani wrote:I've heard rumours that [Satanic Feminism] is getting a reprint soon. Sought after by many, and by your comment I'd deduce that it is worth picking up when it's out.

This is very good news. I was pretty sure this will be re-printed for wider audience, and it's good hear this will be the case. Would it be possible for you to put a message in the forum when this can be ordered, if you are following the publisher? I buy few of by own books brand new, so I am not following any publishers' newsfeeds.

by Vanadís
If you are interested and able to read about Horned god(s) in Finnish, Baphomet & co: